As we are approaching the end of our Math Symbols and Their Meanings series, we are also wrapping up the difficult side of mathematical language. Last time we dealt with Linear and Multilinear Algebra which mostly applies to high-dimensional geometry. In this article, we return to numbers, more specifically to infinite numbers and their operations, part of set theory and calculus.

The concept of infinity  “∞” in mathematics holds various meanings:

The history of this endless concept can be traced back to Pythagoras in geometry, however, it was approached as a more definite theory by Georg Cantor. He came up with the idea that infinity is much more complex than a neverending story: there are different sizes of infinity when it comes to the set theory of natural numbers. Before getting into this, let’s look at the fundamentals of infinite numbers. 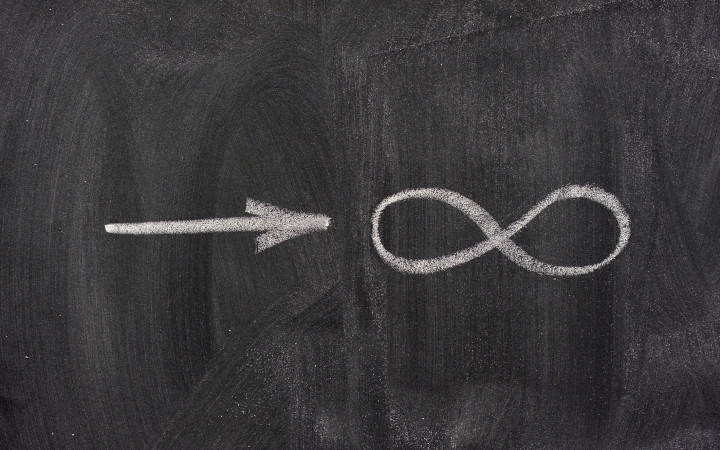 “…” You can see this symbol often in set theory. It means that the set of numbers continues indefinitely.
“Σ”
This symbol used independently indicates the sum of the number set, known as the Sigma notation.
“+∞”, “-∞”
These symbols indicate the sum of infinite arithmetic series which is known as the GP (Geometric progression)
“GP”
These letters stand for Geometric Progression. It means that every number holds a constant ratio to the precedent number in a set. In order to determine the next number, we have to multiply with a common ratio. For example, we have the following set:
GP = 2,4,6,8,10,…
The common ratio would be number 2. This helps us determine the next numbers in the set. A common ratio can be any given number, negative or positive integer. Geometric Progression can be either finite or infinite.
The GP formula is:  where a is the first number of the series, r is the common ratio and n is the unknown value.

Convergence refers to a property of a number or a series of numbers approaching a limit as a variable of the function or a number of a set increases or decreases.
A set or a series is the sum of numbers/terms in an infinite sequence of numbers and is noted with “S”.
A series is convergent if the sequence of its partial sums approaches a limit. For example, the sign of reciprocals (reciprocal means an expression which when multiplied by another expression, gives unity-1 as a result) of powers of 2 give a convergent series.

A divergent series is still an infinite series but where the infinite sequence of the partial sums of the series does not have a finite limit.

A transfinite number is an infinite number in the sense that is far larger than a number but it is not absolutely infinite. There are cardinal transfinite numbers and ordinal transfinite numbers. The concept of transfinity was invented in mathematics by Georg Cantor.
“𐡠 ”
This symbol indicates the “aleph”, meaning the cardinality of any set that can be matched with the integers.
Variations of this symbol are: “ ℵ0   “, read as aleph-null which is standard for the cardinal number of ℕ, while “ 𐡠 ”aleph is sometimes used for the set of real numbers.
Formula: n < ℵ0 for each n ∊ ℕ and ℵ0 < ℵ.
“ ω+1 “
This symbol indicates hyperreal numbers and it is read like: infinity plus one.
There are also “surreal” numbers that indicate an ordered, proper class with real numbers including infinite and infinitesimal numbers, larger or smaller than any positive real number. But enough of confusing infinite numbers that grow and continue forever.
Let’s see how the two most prominent figures when it comes to infinite numbers, Aristotle and Georg Cantor, classified infinite series.

If you want to dive deeper into Cantor’s interpretation of infinite series, check this out.

Don’t run away! Our Math Symbols and Their Meanings series is soon coming to an end, but at the Online Math Center, you can find more interesting facts about mathematics.

You can enroll in any of our math tutoring programs for middle and high school students whenever you feel like improving your math skills.

Reach out to us to receive a tailored math tutoring experience and meet our math tutors.