Home Math Symbols and Their Meanings Part I: Arithmetic Operators

Math Symbols and Their Meanings Part I: Arithmetic Operators

Math Symbols and Their Meanings Part I: Arithmetic Operators

Home Math Symbols and Their Meanings Part I: Arithmetic Operators

We all know that + is a math symbol that denotes addition and is read as a plus. But did you know it can sometimes be used instead of the floor operator ⌊⌋ for a disjoint union of sets?

Whether you’re a parent assisting your child with math homework or a high school student looking to expand your mathematical knowledge, math symbols can oftentimes be confusing. And not understanding them can stand in the way of learning and progress.

To help you better navigate basic and complex math operations moving forward, we’ve compiled a list of mathematical symbols and their meanings that can make your tasks a lot easier.

Let’s get started with a revision of some of the basics for arithmetic operations first. 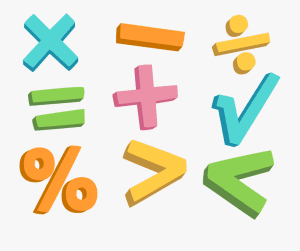 Often used for addition, the + sign indicates that two or more numbers should be added together. For example, 2 + 2 tells you that you should add two with two to obtain four. The + symbol is also used for positive numbers, for example, +2. All numbers that don’t have a sign in front of them are considered positive, so the + is oftentimes not used for practical reasons—it’s simply not necessary all the time.

As previously mentioned, the + symbol is also sometimes used instead of the floor operator ⌊⌋ for a disjoint union of sets.

The sign – reads as minus and is mostly used to denote subtraction. For example, 3 – 2 indicates that two items should be removed from a group of three, resulting in one remaining item. But the – symbol also denotes the additive inverse which is read as negative or the opposite of. For example, -2 is a negative number, as opposed to +2 or just 2 which is a positive number.

The – sign can also be used instead of \ to denote the set-theoretic complement.

In elementary arithmetic, the x sign reads as times and it is the sign of the multiplication table. For example, 2 x 2 means that you should add two twice, or two times, resulting in four. However, in geometry and linear algebra, the x symbol denotes the cross product.

In set theory and category theory, x denotes the Cartesian product and the direct product.

Another symbol for multiplication in elementary arithmetic is the · symbol. For example, 2 x 2 is the same as 2 · 2. However, this is more uncommon in multiplication operations. But in geometry and linear algebra, the · symbol denotes the dot product or scalar product, and it can even be used as a placeholder for an indeterminate element.

The ± symbol reads as plus or minus and denotes either a plus or minus sign. For example, 2 ± 2 means both 2 + 2 and 2 – 2. Used in an equation, the symbol can also indicate that the problem has two solutions, one resulting from addition and the other from subtraction.

The ± symbol can also denote the range of values that a measured quantity may have. For example, 8 ± 4 denotes an unknown value that lies between 4 and 12.

∓ Minus or Plus

The ÷ symbol denotes division and is read as divided by. While the symbol is used for division in anglophone countries, some countries use it for subtraction. And because mathematics is considered a universal language where symbols are the same for everyone, the ÷ is no longer recommended for common use.

Although the: symbol is used as a colon in writing, it has different mathematical meanings. For example, it denotes the ratio of two quantities, it is also a separator in set-builder notation, and in some countries, it is even used for division.

The / symbol is most commonly used for division and other than divided by it can also be read as over. Sometimes, it is replaced by a horizontal bar separating the two numbers, but it is generally encountered in equations such as 3 / 2, for example.

Additionally, the / symbol can denote a quotient structure such as a quotient set, group, or category. In number theory and field theory, F/E indicates a field extension, with F representing an extension field of E.

The √ symbol denotes the square root of a number and it is more often used with a longer horizontal tail delimiting the width of its argument. It can also denote the nth root when it features an integer greater than 2 as a left superscript.

The list of mathematical symbols to revise and understand doesn’t end here.

Hopefully, this first part of our blog posts on math symbols and their meanings helped you remember or deepen your understanding of basic arithmetic operators. More to come soon!

In the meantime, please feel free to reach out to us if you need expert help to expand your knowledge of mathematical symbols.