Mathematics is a language. When we start to learn a new language, first, we have to understand its vocabulary.

When it comes to maths, numbers are the basic alphabet, while symbols create and indicate relations between numbers. Though it might seem easy to you, remembering the basics of mathematics will help you regardless of your math level.

Follow our series of Math Symbols and Their Meanings in order to discover new meanings or refresh your memory.

Comparison is one of the most commonly used operations in mathematics. We all know by now that a number can be bigger or smaller than another. So, what other comparable situations can happen between two or more numbers?

This popular sign indicates a strict inequality, meaning that under no circumstance the two compared numbers or variables can be equivalent or equal. In ordering sets of numbers, it can indicate that the first set is a subgroup of the second one.

Usage: When we want to show or indicate that a number is smaller than another one.

Examples: You can try some online comparing exercises or try to indicate the correct relation for the series of numbers below:

The opposite of the sign above, indicates a greater value than the one before, whereas under no circumstance there can be equality or equivalence between the two numbers or values compared.

It also indicates, between sets or groups, that the second one is a subgroup of the first one – contrary to the “less than” symbol.

Usage: When we want to show or indicate that a number is greater than another one.

Examples: Write the corresponding math symbol to the relation between the following numbers:

This symbol can be confusing for some people since math is usually clear in its language. However, the symbol for “less than or equal to” simply indicates that there can be two relations between, let’s say, a and b. When a ≤ b, it means that a is < b or a = b.

When it comes to sets or groups, it indicates that the first set or group is a subgroup of the second one.

Usage: When we want to indicate that a number is smaller or equal to another one.

Example: Find the x in the following situations

Let’s turn things around and see how numbers behave when we switch the symbol.

This symbol indicates that a number is greater than or equal to another number. When a ≥ b, it means that a is > b or a = b. In the case of number sets or groups, it means that the second one is a subgroup of the first one.

Usage: We use it when we want to indicate that a number is bigger or equal to another number. There can be both a superior or equal or equivalent relation between the two numbers.

Examples: Solve the x in the following situations

The symbols above are commonly used in math exercises in middle school at a basic level.

However, there are some alternations of these main symbols, used in complex mathematical operations and might not be met during general mathematics. 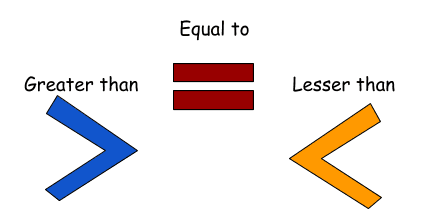 Some variations of the standard symbols for less than or greater than are the double symbols of them.

“≪ , ≫” Much less than, much greater than

Usually used in order theory, in orders of magnitude, it indicates that the value is lesser or greater in quantity. The symbol is used contextually, not tied strictly to quantitative analysis. Students of physics might stumble over this symbol as an approximation of how sufficiently relevant a certain number is in calculus.

It is rarely used as a substitute for the standard symbol of “less than or equal to”. Mostly used in vector analysis as a stand-alone symbol.

“≺ , ≻” Preceding or succeeding in a given order

For more interesting symbols used in math. We’ve also written down some tips and tricks on how to nail mathematical calculations.

Our tutoring programs include SAT training and when you learn math the OMC way, you will be able to participate in any math competition.

Reach out to us if you want to learn more information about the OMC educational curriculum.