Squares And Cubes Of Numbers

One of the fundamental operations in mathematics is multiplication. Multiplication can be operated either between different numbers or the same number can be multiplied by itself. Still, when we multiply a number by itself n times, we name that operation differently: square or cube, depending on the value of n.

Let’s take a better look at squares and cubes of numbers and sort this multiplication problem out.

The symbol of the square of a number is “2”. The square of the number 3 would be indicated by: 32 and the mathematical operation would look like this: 3 x 3 = 9, because we multiply the number by itself once, but the same number is used in the calculus 2 times.

Multiplying numbers by themselves bares the name of square because these particular numbers can be used to fill a perfect square. Square numbers will always form a filled-up square shape.

Let’s test this with some coins!

Pick up some coins and lay them on the desk. Try to set the coins according to the next square numbers:

What about the following squares: 22 , 42, 52 , 72 , 82  do their results form filled-shaped squares? Remember that the square must be filled with coins, just like in the image below: 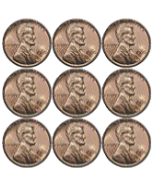 All the numbers can be multiplied by themselves n, respectively 2 times, but only those which form solid shapes of squares are called perfect squares. You can check the lists of perfect square numbers online.

The symbol of the cube numbers is “3”. The cube of number 3 would be noted like: “33” and the mathematical operation would be: 3 x 3 x 3, so the same number is repeated 3 times. Just as square numbers, we have perfect cube numbers.

Try to solve the following exercises:

You can always check online for lists of cube numbers.

Did you know that …?

Now that we’ve mentioned cubes, take a break from mathematics and play with your own Rubik, or if you don’t have one, try to solve an online Rubik, here.

At the Online Math center…

We provide personalized tutoring lessons to middle schools students, either individually or in groups. Our math tutors also offer extensive math lessons to students that are preparing for math competitions. Follow our blog for more entertaining information about mathematics. Reach out to us to plan your first OMC math lesson!