Grade 5 Math: The History of Math

Math is one school subject that splits opinion. Some people love it, some people hate it, but, at one point or another, we all have to do it! But why is it so important? Why is it a key part of school curricula all around the globe?

For us to understand why math is so valuable to middle school students, we must dive into the history of this fascinating subject. Whether it be arithmetic, geometry, numbers, or methods of measurement, the topics covered in the Grade 5 Math curriculum have fascinating origins, each one giving us more of an insight into the wonderfully colored and ancient history of math.

History of arithmetic and geometry

When tracing the history of our school subjects – or anything else for that matter – we must pay attention to the written records, but we must also be aware that there is much we do not know about some topics’ origins.

Math is a perfect example of this. The earliest math texts available are from about 2000 BCE, but we know that one thousand years before this, several states in ancient Mesopotamia were using arithmetic and geometry.

Back in those days, the main uses for arithmetic were to conduct business, and, of course, collect taxes!

Geometry was used in a different way, but it was no less fundamental in the development of human civilizations around the world. Geometry was used for astronomy, the study of the stars and other celestial objects, and the wonders that happen in space. This early use of geometry was key, as it allowed people to begin creating calendars.

The origins of arithmetic and geometry are fascinating, but let me ask you, what good are these subjects without numbers?

If you thought the roots of geometry were old and deep-lying, just wait until you hear about numbers. Some estimates claim that there is archaeological evidence of scratch marks on bone for the purposes of counting as far back as 150,000 years ago.

This may well be the case, but 20,000 years ago someone in the Congo made two identical markings of sixty scratches on a bone. This is considered by many to be the oldest evidence of numbers being used in the way we all use them today and it certainly marks an important moment in the history of mathematics.

Numbers must not be confused with numeral systems. While the numbers are what they are, numeral systems – the systems by which we represent numbers – are different across languages, across cultures and have been that way throughout history.

It is believed that the Egyptians invented the first numeral system. One very important development in numeral systems, and in mathematics overall, was the introduction of zero. It is first documented in India in the 7th Century BCE.

Take a look at these examples of numeral systems that you may not have seen before: 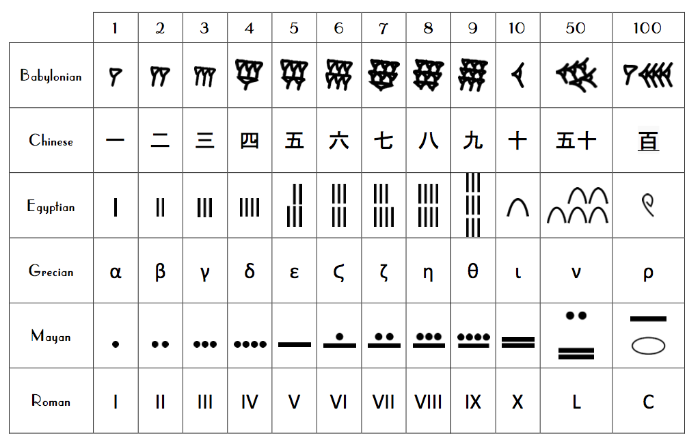 Various civilizations down through the years have contributed concepts that are common in mathematics today. When we compile them all together, we see that there are a wide variety of types of numbers, as well as numeral systems, that we use today.

We couldn’t possibly run through a brief history of mathematics without touching on some of the ways in which we use math today. We use math for an immeasurable number of things. We can use math to measure distances, times, and speeds. We also use math to convey information about ourselves, such as our age, our weight, and our height.

Ancient civilizations also wanted to measure things, so it should come as no surprise to you that there is a rich history of ancient measurement methods, too! Some of these ancient measurement tools are quite simple and, due to their accurate nature, have remained largely unchanged over time.

When it comes to measuring length and weight, each part of the world has its own interpretation of certain measurements. Let’s take a “foot”, as an example. When compared to the English foot (twelve inches), these alternate measurements of a foot show just how varied something seemingly objective can vary: