Fundamental Geometry for Fifth-Graders: All About Angles

Home Blog Math Fundamental Geometry for Fifth-Graders: All About Angles

For young math students to excel as they progress into middle school, geometry is a vital topic to fully grasp. In the fifth grade, children get to see a whole new side of the shapes they’ve known since kindergarten.

One such concept is the angle. What exactly is an angle? What are its components? How are we supposed to measure them? How are angles used in our daily lives?

Answering these questions will help us better understand just how vital angles, and properly understanding them, are to our lives. It can even give your young learners the chance to compete in math competitions.

What Is An Angle?

An angle is formed when two rays meet at a common endpoint, known as the vertex of the angle. Don’t worry if this definition has left you scratching your head, let’s dive into the different parts, so we can get a better understanding of angles.

The vertex is the corner of an angle. It is the point at which two lines meet.

The arms of an angle are the names given to the two sides joint at the vertex.

This is a straight line that’s drawn from where the angle is drawn.

This is the side to which the measurement of the angle is done.

Here is a diagram representing these features of an angle: 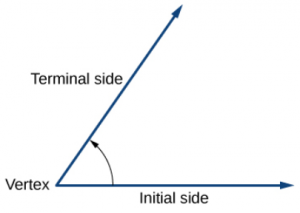 The symbol of an angle is ∠ and, when we measure angles, we answer degrees (°).

Now that we understand the different parts of the angle, we also know that the angle can be described as the amount of turn between each arm.

Now that we’ve established each of the angles components, it’s time for us to see the various types of angles that fifth grade math students will have to learn this school year.

As angles increase, the name we give to these angles changes.

There are certain ways to help young math students remember the names of various angles. For example: Acute, Obtuse, and Reflex are in alphabetical order, reflecting their order in terms of size.

Here is a helpful diagram that puts all the different types of angles in one easy-to-remember layout: 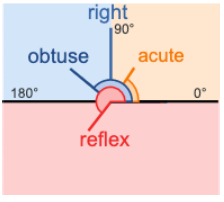 The last point for young math students to note is the difference between positive angles and negative angles.

To put it simply, when we are measuring angles – something we are about to look at in more detail – a positive angle goes counterclockwise, while a negative angle goes clockwise.

When measuring angles, fifth grade students will get to use a piece of equipment known as a protractor. This is a semi-circular seethrough object with the angles between 0 and 180 marked on it. This allows students to place the straight line of the protractor on top of the initial side of the angle they want to measure.

When using a protractor to measure angles, schoolchildren must be careful to measure the correct angles, as well as to label their angles properly.

Students need to become familiar with the types of angles, to ensure they don’t accidentally measure and respond with an obtuse angle when the question asked for the acute angle.

Similarly, students must make sure they label their angles correctly. Angles are often labeled with Greek letters, such as θ (theta), or α (alpha). Angles can also be labeled by the three letters given to the parts of that shape that define the angle. In the diagram below, the topmost angle is labeled alpha, but we could also have labeled it BAC. 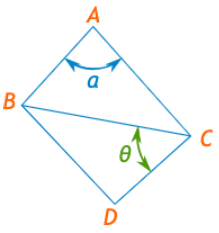 As you can see, geometry is going to offer up some challenges to young math students as they begin the fifth grade. Give them every advantage possible by signing them up for an OMC Fifth Grade Math Course. Our qualified team of experts offers wide-ranging tutoring services and has been proven to give young math learners a leg up on the competition.